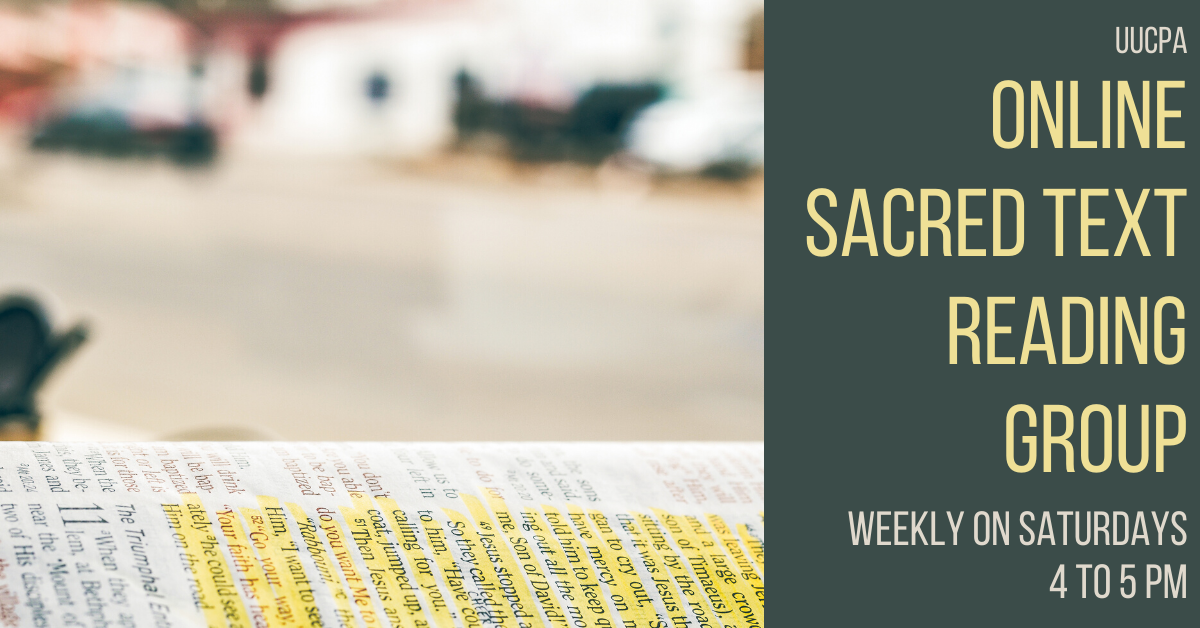 A twice-weekly online sacred text reading group. We meet on Saturdays, 4-5, and on Wednesdays, 12-1. All are wide open and you are welcome!

Using a spiritual-practice approach, in each session we will explore a different brief scriptural text in depth. The aims of the sessions are educational (learning something about the texts and traditions), spiritual/moral (discovering what the texts ask of us), and community-building (getting to know each other better). Our practice usually follows this version of Lectio Divina.

The facilitator will have a version of the text available to share; “bring” your own if you like. All are welcome, as are your suggestions of future texts. Group members also take turns facilitating, if they want to try that role.

Our text for Saturday, January 8 is from Nasr Hamid Abu Zayd (1943-2010), a prominent liberal Islamic theologian. For many years, he was in the Department of Arabic Language and Literature at Cairo University, which is one of Egypt’s most prestigious universities. One of his academic projects was to show there was a diversity of interpretations of the Quran in the immediate aftermath of Muhammad’s death and that interpretations that have long been dominant have prevailed because their upholders have been materially powerful and that these interpretation advance the social and political agenda of those upholders. This work is detailed and very particular. However, Nasr Abu Zayd has also written generally about the nature of a sacred text and how our human capacity to understand a sacred text is limited by our cultural context. It is from these writings that today’s quotes come. In 1995, he was declared an apostate by a Sharia court and fled Egypt to a job at Leiden University. He returned quietly to Egypt near the end of his life and died there.

The [Qur’anic] text changed from the very first moment – that is, when the Prophet recited it at the moment of its revelation – from its existence as a divine text (nass ilahi), and became something understandable, a human text (nass insani), because it changed from revelation to interpretation (li-annahu tahawwala min al-tanzil ila al-ta’wil). (Mafhum al-nass (The concept of the text), 1995, p. 27, tran. Navid Kermani)

[The Qur’an] is a message from Heaven to earth, but it is not a message independent of the rules of reality, with all the structures in which this reality is embedded, the most important of these being the cultural framework. The Absolute reveals Itself to humans by means of Its speech. It ‘lowers Itself to them’ (yatanazzalu ilayhim) , by employing their cultural and linguistic system of meaning. (Mafhum al-nass, p. 65, trans. Navid Kermani)

Oxford Guide to Modern Islamic Intellectuals and the Qur’an. Oxford University Press, 2004. Chapter 6, “From revelation to interpretation: Nasr Hamid Abu Zayd and the Iiterary study of the Qur’an. Navid Kermani.

Kermani is a prominent scholar of Islam based in Germany.

To have check-in time, or if you are new and would like a brief orientation, arrive ten minutes early. And all are welcome to stay ten minutes after as well, for more getting-acquainted time.