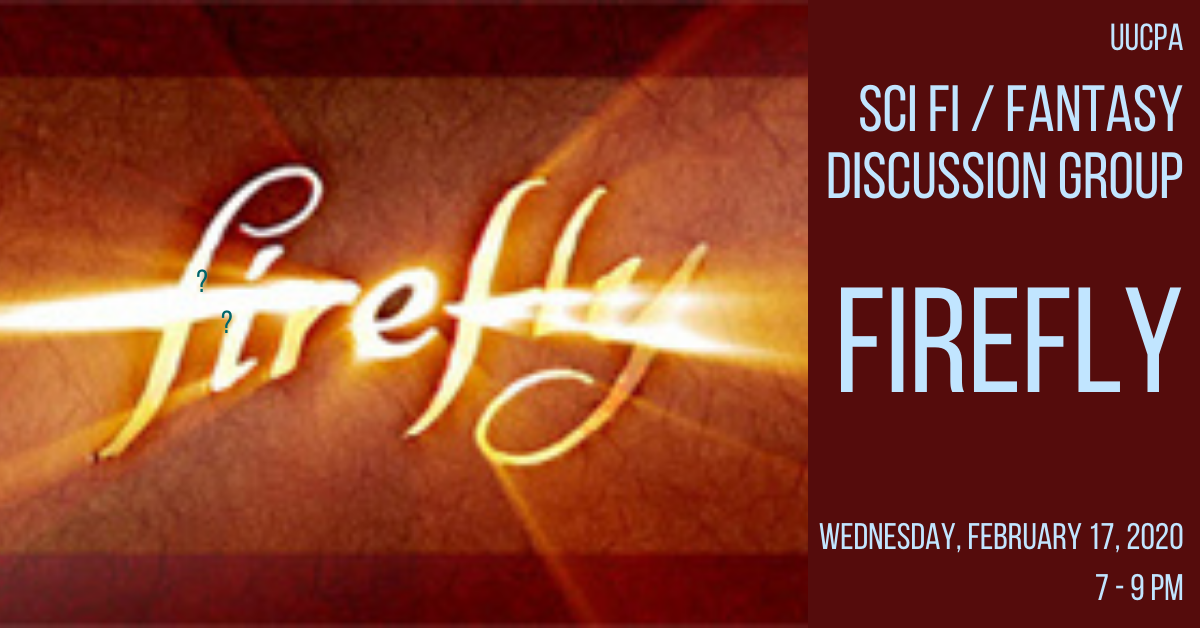 Firefly is a series with 14 episodes, some of which were not aired in the U.S.  The creator’s choice for the first episode was “Serenity,” but the TV overlords didn’t like it so they made him write one with more action and showed that one (“The Train Job”) as the first episode of the aired series. The judgment of the Firefly fans in the group who recommended it was that we watch both.

You can stream Firefly right now on Hulu with a subscription. If you don’t have one, you can buy Season 1 for $12.99 on Amazon (or individual episodes for less), or watch through iTunes, Vudu, YouTube, or Google Play. Your public library may also have it; Palo Alto’s does. Sally Ahnger has DVDs of the whole season and the movie, so if you know Sally and want to borrow them (and time allows), e-mail her.
Wikipedia description of the series: “Firefly is an American space Western drama television series, created by writer and director Joss Whedon, under his Mutant Enemy Productions label. Whedon served as an executive producer, along with Tim Minear. The series is set in the year 2517, after the arrival of humans in a new star system, and follows the adventures of the renegade crew of Serenity, a ‘Firefly-class’ spaceship. The ensemble cast portrays the nine characters who live on Serenity. Whedon pitched the show as ‘nine people looking into the blackness of space and seeing nine different things.’”
P.S. The movie that came out after the TV show and kind of wrapped up all the plot lines is called Serenity as well, so watch out–and if you do get into the series and watch the whole season, you might then want to watch this movie.

The Sci-Fi and Fantasy Discussion Group was meeting via Zoom before it was cool! Lovers of science fiction and fantasy, at UUCPA and beyond, have been getting together online to talk about books, movies, and television episodes, every other month since early 2019.