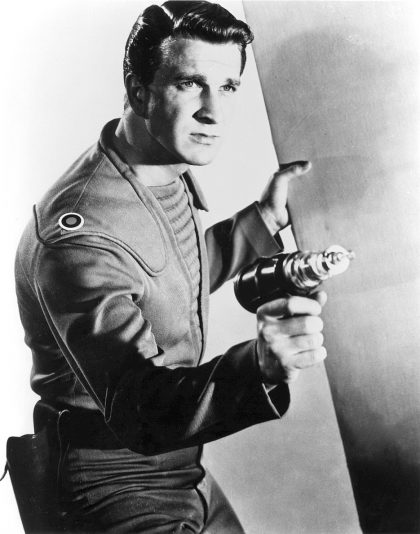 oes this dashing young actor look familiar? Would you believe Leslie Nielson, of later Naked Gun fame?
In our October movie, he has a more serious role as the captain of a 22nd century spaceship crew that goes to investigate a scientific colony that has mysteriously fallen silent. Forbidden Planet (1956; directed by Fred Wilcox; screenplay by Cyril Hume) remains an enduring classic of sci fi moviemaking.

Forbidden Planet pioneered an electronic score and introduced an articulated robot who was a fully-developed character, a leap forward from most, extremely low-budget “rolling tin cans” of the period. (Robby the Robot cost the equivalent of over $1 million in today’s dollars.) Its achievements are not only technical, however. It grapples with numerous psychological and moral issues, such as artificially augmented intelligence, our attempts to understand ancient civilizations, and the power of our unexplored psyches. Don’t be fooled by the lurid advertising!

If you want to get really serious, pair your watching with a reading of Shakespeare’s The Tempest, whose themes and characters are similar enough to those of Forbidden Planet that many viewers have concluded the writers were deliberately adapting the play.

We meet via Zoom, using this link.

The Sci-Fi and Fantasy Discussion Group was meeting via Zoom before it was cool! Lovers of science fiction and fantasy, at UUCPA and beyond, have been getting together online to talk about books, movies, and television episodes chosen by the group, every other month since early 2019. Past books include The Broken Earth Trilogy (N. K. Jemisin), The Moon is a Harsh Mistress (Robert Heinlein), Parable of the Sower (Octavia Butler), The Left Hand of Darkness (Ursula K. Le Guin), Red Moon (Kim Stanley Robinson); past television and movies include Arrival, Blink (Doctor Who), Serenity and The Train Job (Firefly), and The Day the Earth Stood Still.